One of the most frequently asked questions when it comes to heart rate variability (HRV) is, “Where do I stack up?”  Those who are serious about measuring the body’s recovery status and stress tolerance understand that it is generally more important to analyze your own trends over time rather than compare yourself to others. Though, whether it is our competitive nature or the need to clearly understand our starting point, we simply want to know how our key marker of systemic health and resilience, HRV, compares to others.

It is important to note that comparing your HRV to others can be tricky. There are many factors such as age, health, gender, and fitness level to account for. HRV is also sensitive to small changes in physical and mental health. Therefore, when seeing where your HRV values stack up, it is best to compare yourself against people within a similar demographic.

It is important to note that comparing your HRV to others can be tricky. There are many factors such as age, health, gender, and fitness level to account for.

The following information will cover the main demographic and lifestyle contributors to your general HRV values and provide some useful guidelines to help you understand if your HRV values are above average, average, or below average within your demographic. As HRV technology increases in popularity, the growing number of HRV research studies published show varying and sometimes conflicting results. It can be hard to determine the validity of certain studies and the variety of HRV standards can make it hard to compare studies’ results.

Due to the large population analysis, the meta analysis of many studies performed by Nunan et al., 2010 is a good place to start when trying to understand HRV data norms.  The study takes normative data from 44 short-term HRV studies involving 21,438 adult participants of normally healthy adults. Now that we have an idea of the normative HRV values, let’s see how age and gender influences these values.

In fact, the notion that one can control biological age has so much interest that there is a $1 million dollar prize being offered by The Race Against Time Foundation to competing teams that aim to reduce biological age. The foundation is backed by anti-aging thought leaders from Harvard, MIT, Stanford, the Alliance for Aging Research, and dozens more research organizations.

“[The prize] will be awarded to the first team to demonstrate that it can restore homeostatic capacity (using Heart Rate Variability as the surrogate measure) of an aging reference mammal to that of a young adult.” The group has selected Heart Rate Variability as the indicator to determine the teams’ abilities to improve biological age through an improvement in homeostatic capacity.

So, where do you stack up?

Since biological age is not easily quantifiable except via HRV measurement itself, here are some normal ranges for HRV based on chronological age according to the study analyzing 260 healthy subjects performed by Umetani et. al, 1998. 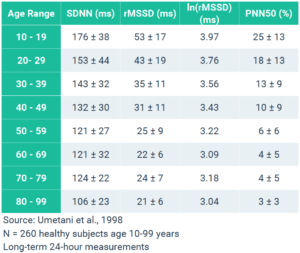 Please note that this study was composed of 24-hour HRV measurements. Therefore, the HRV values will be slightly skewed when compared to short-term HRV measurements but should still provide a general idea of the normal values and ranges for healthy individuals within different age ranges. For a more detailed breakdown of short-term HRV indices per age range (and gender), keep reading. Although age and other factors play a stronger role in influencing HRV than gender, notable gender dependencies of short-term HRV indices have been observed.

In the study, the short-term (5 minute ECG/EKG measurements) HRV indices for 1,906 healthy individuals aged 25 – 74 years were analyzed to determine gender and age effects on HRV.  The results showed that women under age 55 exhibit higher HRV time-domain values for RMSSD, PNN50, and, higher HF and lower LF and LF/HF ratio than men in comparable age ranges. In particular, the notably higher Time Domain RMSSD, lower Frequency Domain LF/HF ratio, and lower Poincare SD1/SD2 in females below the age of 55 demonstrate the increased Parasympathetic dominance.

How do you compare to your age-gender demographic?

Interestingly, the gender-related variation in HRV decreases over the age of 55 years. The major age-related HRV differences for both genders are between ranges 35–44 years and 45–54 years. The study suggests that the gender-related HRV differences in the younger ages is probably caused by “the different hormonal situations leading to a higher sympathetic activity and a lower parasympathetic tone in men and vice versus in women”.

Gender-related variation in HRV decreases over the age of 55 years.

Furthermore, when comparing age groups 45–54 years and 55–64 years, females have significantly higher HRV differences compared to males, which corresponds to age-related hormone effects (menopause). The gender-related HRV differences disappear with aging because of the “hormonal restructuring” such as menopause in women and other hormonal changes in men that occur with aging and lead to more “comparable hormonal stages” in the gender groups above age 55. Some other studies show that declined estrogen levels associated with the Autonomic Nervous System changes seen in postmenopausal women (Moodithaya et al., 2009) and increased total HRV and baroreflex sensitivity in postmenopausal women with hormone replacement therapy (Pikkujämsä et al., 2001) suggest that hormonal factors play a role for the observed age and gender related differences.

Considerable loss of heart beat variability and complexity could mainly be caused by cardiovascular structural changes through the loss of sinoatrial pacemaker cells or decreased arterial flexibility and functional changes in other regulatory processes that occurs during aging (Ferrari AU et al., 2002).

So, while gender does influence HRV values, especially in younger years, age has a greater contribution to HRV and overall health and resilience.

Keep in mind, there are exceptions for both above average and below average HRV cases, some of which are covered in Part 2 and Part 3 of this HRV Demographics series. Factors such as fitness level and physical and mental health can influence biological age and reflect in your Heart Rate Variability.

If your HRV values are below your age-gender demographic range, then you may have underlying health concerns that are negatively affecting your biological age.

Next Up – Fitness Level Demographics

In Part 2, we cover the impact that fitness has on your heart rate variability and how “fit” populations stack up against elite athletes and sedentary populations.

Did you know that aerobic fitness can actually mask underlying health issues? More on this in Part 2.

Interested in learning more about the science behind HRV and how monitoring it can help improve your health and performance? Get access to the “Foundations of Heart Rate Variability” course!

Ferrari AU. Modifications of the cardiovascular system with aging. The American journal of geriatric cardiology. 2002; 11: 30–33. For a deeper look at the research on how and why age, gender, and fitness level impact HRV, check out the series HRV Demographics 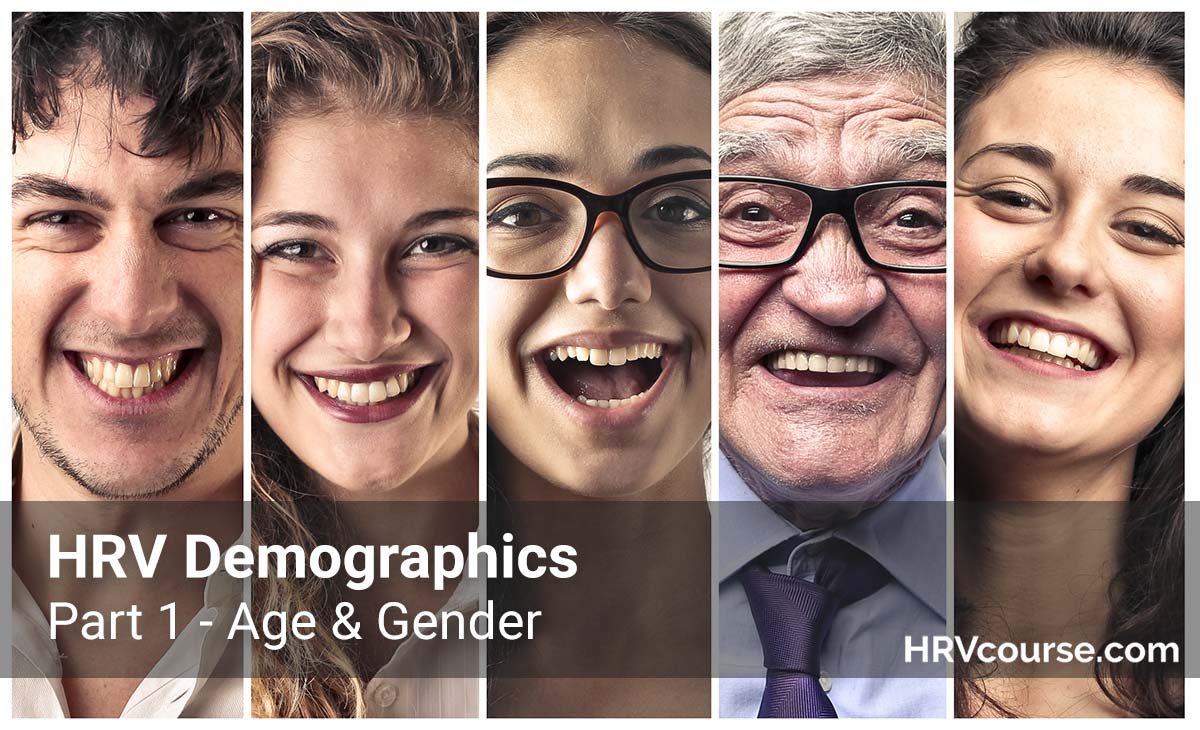 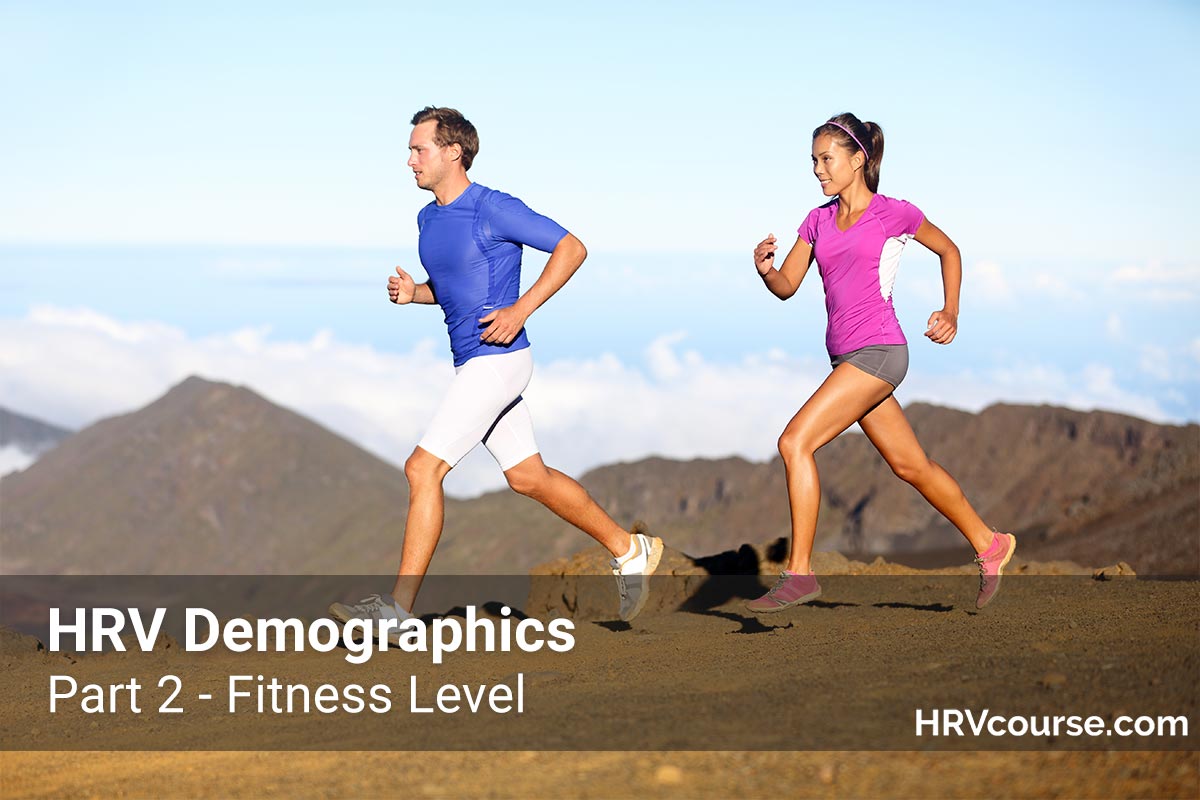 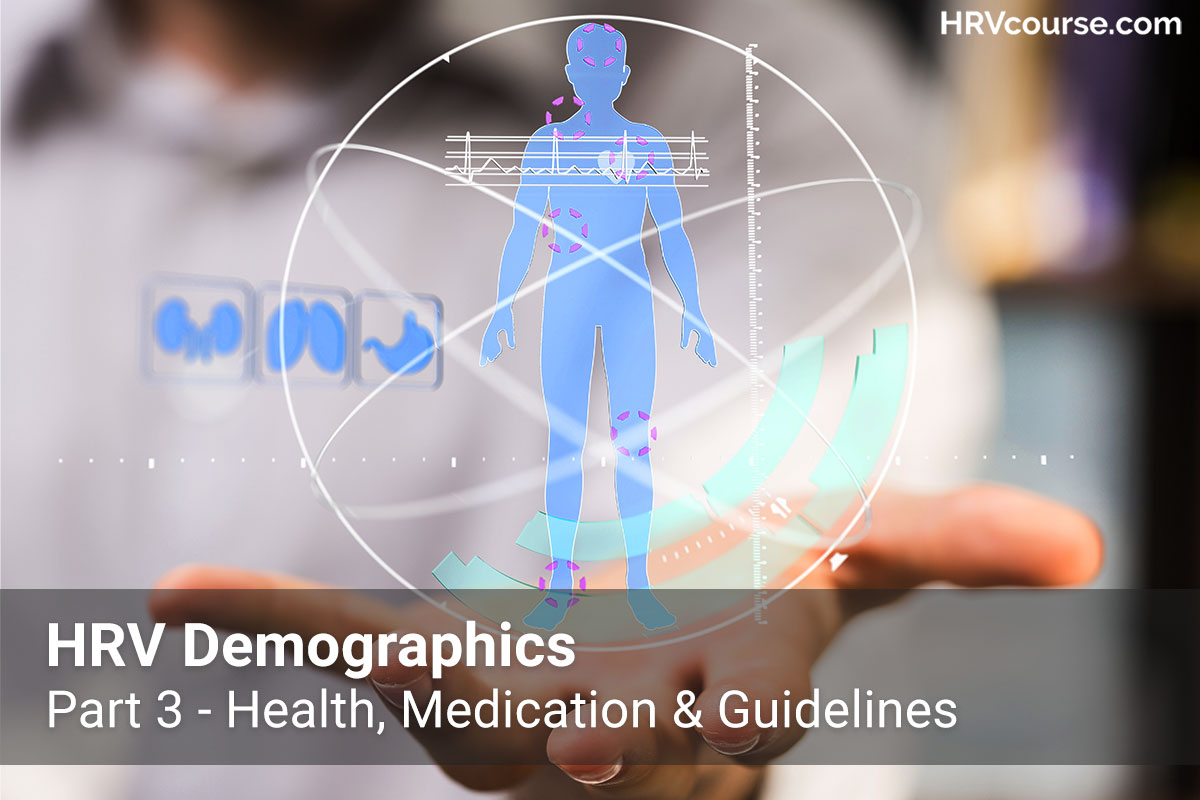 Success! You will be the first to know when the LCHF for Ultra-Endurance course is ready.

This form is secure and email addresses are kept private.

The Foundations of Heart Rate Variability Course will open again later this year.

Feedback from participants has been so positive, that we will continue offering periodic short enrollment periods to keep the quality of the experience as high as possible. Since enrollment will be limited, we will be announcing first to those who have registered interest hereJoin our mailing list to receive the latest news and updates from our team.

Success! You will be the first to know when the HRV Course opens for enrollment.

Enter your email to sign up for the free HIIT Mini-Course.

Be First to Know When This Course is Available!

You have successfully subscribed

Be First to Know When This Course is Available!

Sign up here if you would like to be sent more information and view a demonstration of the Team Dashboard.

Check your inbox for more information!